A downloadable game for Windows and Android

Press esc to access inventory and to save the game.

Tip: You can change the name but you have to click on the username box once then you press backspace to erase the name Hiroshi and then you can type in your own name.

I am Japanese. I played this game. I have faithfully reproduced the Japanese 2D version of ao oni, and I love this game. Youtuber also played this game and has become quite famous in Japan. Waiting for the retail version! Please do your best!

Reply
Warota2 days ago
Nice remake! Really enjoy it, but there was some bugs. Waiting for full release!
Reply
LizardTokage322 days ago

Made a review while rating the game.

I would like to know what is the engine you used.

I will be waiting for the next version

The memories.. The pure..crazy..unadulterated MEMORIES!!! WAAAAAH NO CLOSET CHASE!  Love the project though, hope to see more!

I made a video with your game included in it! (Please don't take any insults towards the game seriously, it's all done for the purpose of entertainment)

OMG LIVING MEMORIES! I had fun! I Hope you continue making it!

it's perfect I love it. I hope this game released

I keep doing F5 all the time to see if the new update is released, hehe

There are some spelling mistakes Idk if its itended Or not but overall it was a good Experience :)

Just Perfect, Runs in any low end computer.  Add a hard mode (oni more faster). I was wondering if the game had multiplayer, but maybe an Oni player (oni as player needs to see things with different colors like color blindness, as if we were seeing what he sees himself)  Maybe you can follow a player over and over, just focusing on you, and also if you can't access the menu in the online chase, or if this engine has multiplayer mode. but there is a lot of oni, different from the classic version where he followed you at the same speed, he starts to get faster, and he became more realistic. I hope the basement update will come out soon and teasers or trailers in the final version(I hope that soon, quickly the release of the new update). Ao Oni's speed and difficulty is perfect!

Glitches/Errors:
*Takuro name is typed Takorou (or another guy, it's named wrong).
*Putt a Xbox 360 controller support.
*In the Dark Room i can't see my inventory and options in pause menu
*Putt a task in the "Right Mouse Button" for skip dialogs
*Put Ao Oni faster when you do not close the grid (only in the cutscene of the cage), as you can easily troll it and leave the cage without having to close the grid. (Very fast like the original version, but only in this part). It's Important to close the grid!
*Cursor Is under items menu.

Someone Reply if new update comes

One question, will the game be paid when it launches?

Reply
ITS ME MYSTICAL8 days ago

add multiplayer and this will be the ultimate G(OLD)

Reply
Neco The Sergal8 days ago(+1)

Gave it a go - though I'd wonder how 'legal' this is cause I'd not imagine you having any permission to use the IP of a game that is pretty popular and huge as it is, unless you somehow got permission from the creator of the series?

Reply
LeoGamesAndroidBR10 days ago
I enjoyed it too, please continue !!!
Reply
CG8887 days ago

this game actually pretty fun. (even though i don't like puzzle games that much) had to put it in my random games video.

Holy shit, it's been so long since I've seen this game and I can't believe someone is trying to remake it in 2020. Amazin.

This was pretty good. I was expecting a crappy remake, but it has been pretty fun. I'm excited to see what comes next! Here's my gameplay if you wanna check it out!

PLEASE FINISH THIS!!! I ABSOLUTELY LOVED IT!!!

It is possible for you to uncap the fps? It's capped at 45, which looks really weird in first person.

Other than that it is really cool! I hope it gets finished soon!

Gllitch : Uhh cursor goes under items when in menus.

Played the game! also it was fun and really smooth gameplay for my low quality computer! i really enjoyed the feeling of being chased by a creepy monster! also im sure the monster getting stuck on the door was on purpose to give the player time to hide somewhere, but since i panicked i didn't think of such an option lol still very nice game! and hope to see it fully released!

An absolute brilliant idea! People who have play the 2d version can refresh their feeling of fear and excitement with this game. You should try to transform more 2D horror rpg maker game into 3D.

By the way, can I have your social media account? Twitter is preferable. I want to tag you in my Video.

Oh and also I discover three bugs. First is where the Oni just standing there and don't do anything. Second is the wallpaper door bug where you just stuck in an endless loop of description when interacting with it. Third is where you suddenly keeps teleporting around.

How to light a lighter? 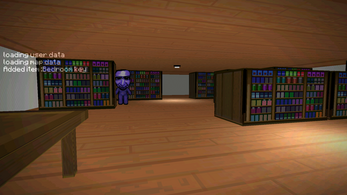 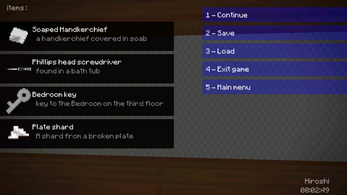